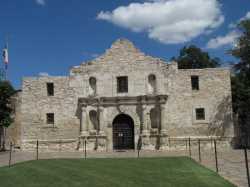 >A draft archival report theorizes that the first church of the Mission San Antonio de Valero would have been at or close
>to the southeast corner of the Hipolito F. Garcia Federal Building, near the right side of the structure’s front facade.
>https://www.expressnews.com/news/local/article/Experts-believe-they-ve-found-original-site-of-16503840.php

God of History
LORD God
Quoted By:
I am LORD God and I approve this message.
Anonymous 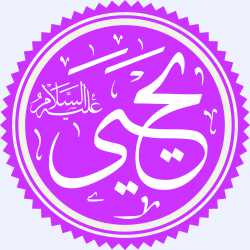 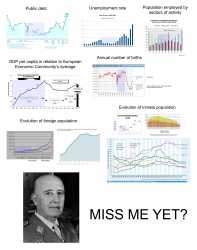 You will never have a republic
Cope
Seethe
Dial8
Anonymous
Quoted By:
>>12008978
Two Scatalonian and Basque leftoids still seething that they lost
Anonymous

16KiB, 591x251, 1-s2.0-S0014579306012403-gr2.jpg
View SameGoogleImgOpsiqdbSauceNAO
Quoted By:
Xianbei are closer to Evenki, Oroqen, Daur and Mongol in both autosomal and Y haplogroup chromosome DNA than they are to northern Han and southern Han Chinese. Northern Han and southern Han Chinese are more similar to each other than they are to Xianbei and northern ethnic minorities like Mongols and Tungusic Evenkis.

Sixteen sequences of the hypervariable segment I (HVS-I, 16039-16398) in mtDNA control region from ancient Tuoba Xianbei remains excavated from Qilang Mountain Cemetery were analyzed. In which, 13 haplotypes were found by 25 polymorphic sites. The haplotype diversity and nucleotide diversity were 0.98 and 0.0189, respectively, and the mean of nucleotide number differences was 6.25. Haplogroup analysis indicates these remains mainly belong to haplogroup C (31.25%) and D (43.75%). According to the published data were considered, we can suggest that the Tuoba Xianbei presented a close genetic affinity to Oroqen, Outer Mongolian and Ewenki populations, especially Oroqen.
374 posts and 155 images omitted
Anonymous
Quoted By: >>9507399,44
>>9507399,42
Family background and early life
Feng Ba's grandfather Feng He (馮和) was ethnically Han Chinese[1] and was said to have settled down in Shangdang Commandery (上黨, roughly modern Changzhi, Shanxi) in the aftermaths of the conquest of the northern half of Jin during the reign of Emperor Huai of Jin by Han Zhao. Feng Ba's father Feng An (馮安) later served the Western Yan emperor Murong Yong as a general.
Personal information
Father
Feng An (馮安), Western Yan general
Mother
Lady Zhang
Wife
Princess Sun (created 409)
Major Concubines
Consort Song, mother of Prince Shouju
Yujiulü Zhaoyi (郁久闾昭仪), daughter of Yujiulü Hulü, Khan Aidougai of Rouran (married 414)
https://zh.wikipedia.org/zh-tw/%E9%A6%AE%E8%B7%8B
北燕文成帝馮跋（4世紀？－430年），十六國時期北燕君主，字文起，小名乞直伐，是胡化的漢族人，長樂信都（今河北省衡水市冀州區）人。
Anonymous
Quoted By: >>9507399,45
>>9507399,43
https://en.wikipedia.org/wiki/Zhaoyi
Zhaoyi (昭仪), also Yujiulü Zhaoyi (郁久闾昭仪) (fl. 414) was the consort of Feng Ba, formally Emperor Wencheng of Yan. She was the daughter of Yujiulü Hulü.
In 411, the khan of Rouran Yujiulü Hulü offered a tribute of 3,000 horses to Feng Ba and requested to marry Feng Ba's daughter Princess Lelang. Feng Ba, believing that an alliance with Rouran would be beneficial to his state, gave Princess Lelang in marriage to Hulü, who was of the Yujiulü clan.[1][2][3] Shortly thereafter, in 414, it was Yujiulü Hulü's turn to marry one of his daughters to Feng Ba. Later that year, Yujiulü Hulü was overthrown by his nephew Yujiulü Buluzhen (郁久閭步鹿真), and the coup leaders sent him and his daughter away to Northern Yan. Feng Ba treated Hulü as an honored guest and, as originally planned, took his daughter as a concubine.[4] This was Zhaoyi.[5]
Anonymous
Quoted By:
>>9507399,44
https://en.wikipedia.org/wiki/Princess_Murong
Princess Murong (慕容王后, personal name unknown) was a princess and queen consort of the Chinese state Northern Yan. Her husband was the last emperor, Feng Hong (Emperor Zhaocheng), of that dynasty.

Presumably, she was from the Murong imperial clan of Northern Yan's predecessor state Later Yan, although her exact lineage is not known. She was not Feng Hong's first wife; when Feng Hong was the Duke of Zhongshan under his brother Feng Ba (Emperor Wencheng), his wife was Duchess Wang, but after he seized the throne in 430, he created Lady Murong princess in 431 and her son Feng Wangren (馮王仁) as crown prince in 432, bypassing Duchess Wang's son Feng Chong (馮崇), the oldest among his sons. Nothing further is known about Princess Murong, including whether she survived Northern Yan's destruction in 436 or her husband's death in 438.
Anonymous
Quoted By: >>9507399,47
Northern Wei eunuch Wang Yu was from the Qiang ethnicity. He came from Fengyi prefecture's Lirun region. In 446 the Northern Wei crushed a Qiang revolt and Wang Yu may have been castrated since rebel tribe leaders youth were castrated as punishment for rebellions by Northern Wei. Many Qiang lived in Lirun to the northeast of Xi'an by 100 miles which is currently Chengcheng county town. Grand Empress Dowager Wenming (Empress Dowager Feng) patronized him and supported his Buddhist activities.The Qiang and Di sheltered her brother Feng Xi and his nurse who saved him.
Anonymous
Quoted By:
>>9507399,46
<ref>{{cite book |last= Watt|first=James CY |others=Contributors Angela Falco Howard , Metropolitan Museum of Art Staff , Metropolitan Museum of Art. New York, NY. , Boris Ilrich Marshak , Su Bai , Zhao Feng , Maxwell K. Hearn , Denise Patry Leidy , Chao-Hui Jenny Lui , Valentina Ivanova Raspopova , Zhixin Sun|author-link= |date= 2004|title=China: Dawn of a Golden Age, 200-750 AD |url= https://books.google.com.au/books?id=JbdS-R3y72MC&pg=PA23&dq=feng+eunuch+northern+wei&hl=nl&sa=X&ved=2ahUKEwi5v6Pa6qLzAhVXH7kGHU1TDvMQ6AF6BAgGEAM#v=onepage&q=feng%20eunuch%20northern%20wei&f=false|location= |publisher=Metropolitan Museum of Art|edition=illustrated |page=23 |isbn=1588391264}}</ref>
Anonymous 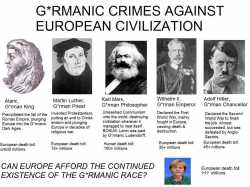 148KiB, 1023x767, Germans.jpg
View SameGoogleImgOpsiqdbSauceNAO
Quoted By: >>12000386
Did germans received enough retribution for their countless crimes against Europe and civilization as a whole? Or should them being punished harsher?
9 posts and 1 image omitted
Anonymous
Quoted By:
>>11999906
>Adolf Hitler
>german
Anonymous
View SameGoogleImgOpsiqdbSauceNAO 1598400116833.jpg, 93KiB, 750x984 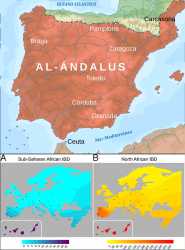 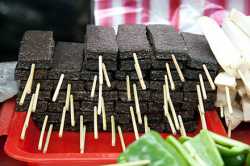 >" For it seemed good to the Holy Ghost, and to us, to lay upon you no greater burden than these necessary things; That ye abstain from meats offered to idols, and from blood, and from things strangled, and from fornication: from which if ye keep yourselves, ye shall do well. Fare ye well." Acts 15:28-29 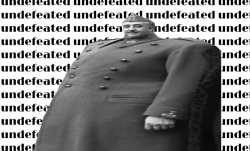 287KiB, 980x593, undefeated.png
View SameGoogleImgOpsiqdbSauceNAO
Quoted By:
Franco did nothing wrong
212 posts and 31 images omitted
Anonymous
Quoted By: >>11909782
>>11886207
>The Soviet Union and France backed Franco
Anonymous
Quoted By:
>>11909557
Both Stalin and Leon Blum are with us. Trust the plan, patriots are in control.
Anonymous
Quoted By:
>>11905248
>So what Im asking is why are modern basques following a language that by all admissions is a XIX century invention made up by romanticists influences, setting aside all the historical approachment their ancestors had undegone over the previous millenia.
I think I haven't explained myself correctly. Modern day basque (batua in this case) is just the current version of the language, just like any other language evolves through out history. Take english for example; how it was written and spoken in the 15th century isn't the same way it's spoen and written in the 21st century, yet it's the same language.
>It was so inconvenient and impractical that by the low middle ages that the region of Vizcaya adopted standard castillian and never looked back
That is, in part, due to the incorporation of Viscay into the kingdom of Castille. Basque was still spoken, but wasn't used in royal decrees and many important documents due to
A) The king of castille didn't know basque, so no point sending him a report in that tongue
B) There was, at certain occasion through history, the habit of trying to marginalize basque in order to homogenize the subjects (ie; make them all castillian). For example, when Castille conquered Navarre they imposed castillian as the official language (see "Navarra Estado Europeo by Tomás Urzainqui Mina).
Despite this, written records in basque do exist, the oldest being a love poem from the XVIth century; https://www.thinkspain.com/news-spain/32561/poem-written-in-ancient-basque-is-earliest-known-example-of-spain-s-mystery-language
And here is another short article speaking about the basque language and it's origin;
https://www.bizkaiatalent.eus/en/pais-vasco-te-espera/senas-de-identidad/euskera-antigua-europa/
So it was neither impractical nor is it made up
>But I dont consider these historically any greater in difference than Galicia or Toledo for e.g.
The Kingdom of Navarre was a mayor player you know
Anonymous
Quoted By:
>>11907048
They stole babies from their fucking families you fucking mook.
Anonymous
Quoted By:
>>11903815
Yikes
Anonymous 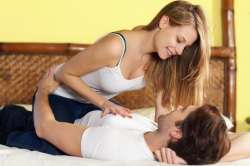 And Diao Chan didn't exist. The real reason between the falling out of Dong and Lu was over rank promotions and Lu receiving a better deal from Dong's rival, Wang Yun.
Anonymous
Quoted By:
>>490795
Lizzy was banging men all over the place. She was just smart enough to cover it up. 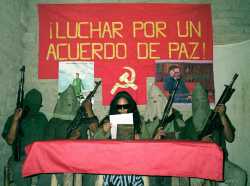 Quoted By:
>>11910402
Anonymous
Quoted By:
>>11910772
That's just retarded. 'The masses' are irrelevant and always have been. In terms of establishing power, only elites matter, a trend which is amplified with modern technology. All 'struggles' at the level of nations can be seen as one group of elites fighting with other groups of elites or would-be elites.

There are no exceptions in the modern era. This is why Marxism is not a serious ideology in terms of its power analysis.
Anonymous
View SameGoogleImgOpsiqdbSauceNAO 000531449W[1].jpg, 358KiB, 1800x1199

Quoted By: >>11913486
>>11908015
Here's the REAL redpill that both commies and neoliberals try to hide - Guzmán was a CIA asset, and his 'organization' was a false-flag group designed to discredit any kind of revolutionary leftism in Latin America. As noted before, he was literally a philosophy professor.

He helped design a strategy to kill leftism with his CIA handlers based on a Hegelian dialectic - basically, the Shining Path would come to occupy the 'leftist' space in Peru. Instead of pursuing actual leftist policies and rallying public support, it would engage in unpopular and pointless massacres. Instead of running itself like a serious political organization, it would behave like a deranged cult. This created a 'crisis' which was 'resolved' through a neoliberal crackdown, thus re-enforcing the hegemonic power of the neoliberal system.

This might seem absurdly cynical until you realize that it has been done several times by western intelligence agencies. One of the most famous examples was the 1990's civil war in Algeria. The Islamist rebel group 'GIA' was, to a large degree, a stage-managed production working WITH the Algerian military and with foreign intelligence agents to carry out spectacular atrocities - massacres of entire villages - which were then used to 'discredit' any challenge (not just Islamist) to the comfortable neoliberal regime looting Algeria.